Not long ago, the Pew Research Center unleashed on the world the results of a study highlighting how Internet users, and specifically Facebook users, are much more likely to engage in political activities like voting or attending political meetings. However, another research company, Resonate, was conducting a similar study of their own, and their findings were drastically different.

According to Resonate, "heavy" social media users "don't translate to desired behaviors" offline, and they warn marketers looking to dive into social media that their "results do suggest that the rush to social should be tempered with a little more caution."

They analyzed these three groups in combination with their online purchase behavior and political activity and their findings seem to suggest that these consumers may not supply the ROI that many marketers are looking for (and investing in heavily).

What they found was that most of the heavy social media users are, no surprise, less involved in the offline world than their counterparts who don't spend as much time on similar sites.

But shouldn't all of that time spent online, and thus in more prolonged contact with all of the ads that can be found plastered on social media sites, lead to more frequent purchasing by these Heavy users?

Apparently not. In fact, the study says that not only are these Heavy users statistically less likely to purchase products or services online, but they typically spend less money than others when they do.

Of course, these are just the findings of a single study, and as I've already mentioned, other research shows that time spent engaged in social media has a greater affect on a users offline activities, so this particular set of data is likely not an absolute characterization of the issue. Still, considering how much money marketers spend catering to social network users, and, presumably, more, uh, heavily to the Heavy users, I wouldn't just sweep this data under the rug, either. 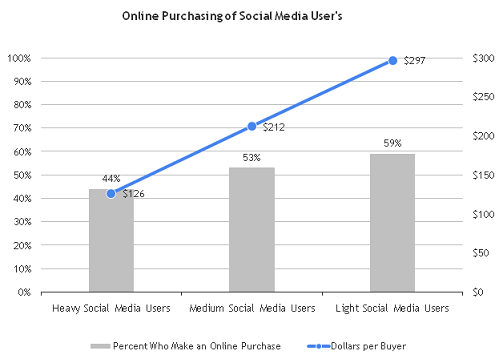 Not already a part of our community?
Sign up to participate in the discussion. It's free and quick.